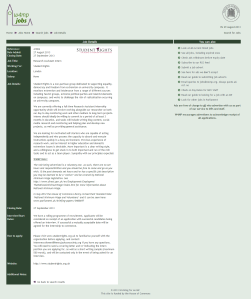 Student Rights has sought to recruit unpaid interns to carry out its work monitoring students on campus.

Despite the suggestion in its name that it seeks to support students, it’s likely that the candidates it tried to recruit to work for free, for three months, full-time, will have been students seeking experience in a competitive jobs market.

This screenshot above (click on the image to enlarge) is of the advert posted on the jobs and internships site Work4MP in September 2013, showing that the Henry Jackson Society group had what it calls ‘a rolling programme of recruitment’.

Because the position is unpaid, the Work4MP site carries a disclaimer warning potential recruits that though their duties may be called voluntary they could in fact constitute work and qualify for at least the legal minimum wage.

Ironically campaigns against unpaid internships have long been a major concern of students and recent graduates, with students unions at UCL, University of the Arts, Sussex and LSE, for example, all highlighting the issue. Student Rights seems unconcerned about the exploitative nature of such a set up, however, and doesn’t even mention paying travel expenses.

This entry was posted in Uncategorized. Bookmark the permalink.